GIVE US A CALL

Someday we ought to own a bar | A pub you can call home, where family meets! 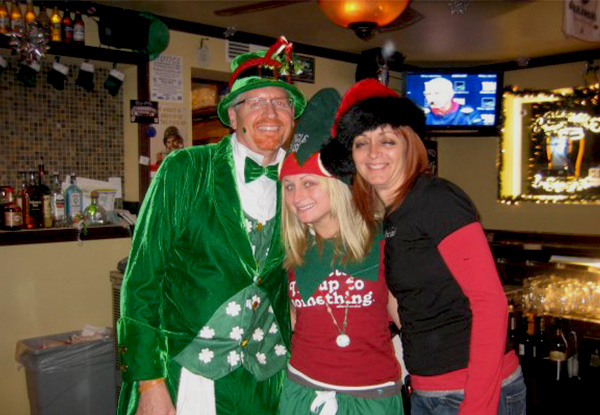 “Someday we ought to own a bar”

While not documented, to date, but working on it, the location has a great deal of history and tradition through several different taverns that were housed there since the early 1940’s. It has been said that the property originally housed a tavern and an auto repair shop, which is the pub today. The tavern, which sat in front of the current pub, had a natural gas leak in 1947, and while unplugging the jukebox, it sparked and started the tavern on fire. The next morning, in order to continue serving beverages, they created a makeshift bar outside by putting saw horses with plywood on top of it in order not to miss a bit and begin serving. Sounds like they were Irish back then and was meant to be an Irish Pub at some point! After that, they turned the auto repair shop, into what currently houses NIP’S. There are several individuals that come in today that have stories about being in the pub, when it was one of the several other names, either with their parents, grandparents or just themselves. Whatever it was, it is very apparent, through the stories, that it was like family back then and one of the many reasons why, outside of who they are, Nettie & Cav continue that tradition and consider all who visit, “NIP’S Family”. They tag it as “A Fun & Down to Earth Experience” A place where you can go to relax, meet new friends, old friends, have some conversation, lots of laughs, a bowl of peanuts, a great cold beverage, enjoy some activities and just have some plain old craic! A place where you;

“Enter as Strangers & Leave as Friends.”

They are committed to “Best in Class Customer Service & Experience,” have followed and will continue following that philosophy through and in themselves and their staff, on a minute by minute, hour by hour, day by day, month by month and year by year basis. They know and believe that people have other choices; therefore they will focus on “Continual Improvement” by asking for input, listening to suggestions and feedback to make changes to what the “NIP’S Family” wants rather than what they may want. They strongly believe that this is what created the best and most enjoyable experience one can have.

In their desire to make NIP’S a destination, yet maintaining the family, coziness and quaint atmosphere, they have carried this philosophy in improving the pub which started as 400 sq. ft. that was renovated in 2008 with new windows, drywall, bathrooms, floor, sound system and 4 new TV’s. In 2009 they were asked to sponsor a dart team. With the reluctance of their vendor, they brought in a dart board and sponsored their first dart team. Due to space they would store the dartboard in the foyer of the pub during the week and roll it out and place it next to the bar when their team played at home. At the end of the night’s competition, they would roll it back to the foyer and let it set until the next time their team would play at home. In 2011 they added a 700 sq. ft. room with an Irish Flair, including tiled ceilings, two 8’h x 7’w out-swing French doors and other doors and windows to provide an open, but cozy concept with dark cherry wood. In 2013 a 2,000 sq. ft. deck, with a bar, was added that has opened up many new opportunities including additional activities, such as party bookings, corporate events, wedding receptions, live music with different genres, Horseshoe, Cornhole (Bags) Leagues, and tournaments as well as the many charitable and community events they host. The likes of Pewaukee Fire Auxiliary, Melanoma, Autism, Breast Cancer, Alzheimer’s, Leukemia, Variety of Wisconsin, Pewaukee Food Pantry and others. These organizations are benefited through events stated specifically for them or as part of another event. They have Chili & Irish Stew Cook offs, Derby Days for Autism, Raffles, St. Patrick’s Day and much more which will continue as long as Nettie & Cav are around!

NIP’S is known to host the largest St. Patrick’s Day Celebration in the Lake Country Area. They celebrate the day on March 17th each year. They do so with live music throughout the day and night, including Bag Pipers, serve Corned Beef Dinners, Green Beer and donate a portion of all proceeds to The Pewaukee Fire Auxiliar y. Something they set out to do from the day they started. Give back to a local organization.

They have also created one of the largest settings for Horseshoe and Cornhole Leagues and Tournaments. They started this in 2009, with just one Horseshoe League night. In 2010 they added another night of Horseshoes as well as one night of Cornhole League. In 2011 due to the high demand, they added another Cornhole League night creating Horseshoe Leagues on Tuesday & Wednesday nights and Cornhole Leagues on Monday & Thursday nights. All are still going strong with continued success! They have also added Cornhole Tournaments during the many charity events they host as well as during June, July & August of each year. In 2013 they tested the waters with outdoor music, which caught traction and in 2014 they started what has become known as “Thirsty Thursday’s on the Deck”. Outdoor music from the first Thursday in June to the last Thursday in August! They host all genres of music with bands of great talent and for all ages, 21 & up. In 2015 as a result of all of the hard work by their staff and the loyalty of the NIP’S Family, they were awarded Journal Communications, Greater Milwaukee Number 1 Corner Bar! What a great honor!

Nettie & Cav’s passion for their family, staff, customers, community and the business gives them the ongoing drive to keep improving and advancing based on the input of the NIP’S family. That input is something they cherish dearly and will always ask you for when you visit with them. They love their extended family and always look forward to putting a smile on someone’s face, to share a story with each other, to support in good times and bad and to work hard and play hard in order to give and get the most out of life! If they don’t know you when you come in, they will by the time you leave and if they do, they will do more to know you more and better.

Always know that Nettie & Cav will continue to listen to all, in order to make a difference, to have a positive impact, while making it better for all.